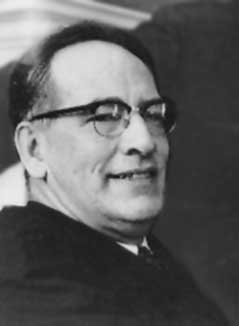 Early Life
John William Mauchly was born on August 30, 1907. He was born in Cincinnati. His family soon moved to Chevy Chase, Maryland. His mother’s name was Rachel. John’s father, Sebastian, was a scientist. He studied the weather.
John was an inventive boy. When he was five years old, he built a flashlight. He liked to work with electricity. Once, at Halloween, he fixed the doorbell. He made it give anyone who rang it a mild electric shock.
When John was in High School, his father became sick. He needed to rest. But he would not slow down. He kept on with his work. By the time John started college, his parents had moved to the seashore in New Jersey. They were trying to help his father get better.

Studying at Johns Hopkins University
John was a very good student. He won a scholarship to go to college. He went to Johns Hopkins University. The scholarship allowed him to study electrical engineering. John did not like this subject. He was interested in physics. The University had a special program. It was only for the best students. It allowed students to skip college and go directly to graduate school. John was allowed to do this. He joined the graduate Physics program in 1927.  John’s father died in 1928. In 1930 John married Mary Walzl. In 1932 John finished his studies. He earned his doctorate in Physics.

Finding a Place to Work
In 1932, when John finished school, jobs were hard to get. It was the time in history that we call the Depression. John wanted to work in molecular spectroscopy. He could not find work. Finally he found a job. He was hired to teach Physics at Ursinus College.
John was interested in doing research. He was interested in weather information. John studied data from all over the world. He concentrated on the weather in just one month. He had to do a lot of math problems in his studies. It took him a long time. John wrote a paper about his findings. The experts said that his work was no good. They said he needed to study more than just one month’s worth of figures. John was discouraged. It would take him years to do that many math problems.
John tried to build an electronic calculating machine. He spent two years on this project. He couldn’t afford good equipment. His machine did not work very well.

Moore School of Electrical Engineering
The army was looking for people who had studied math and physics. They wanted people to work on their new weapons and communications systems. They asked the Moore School of Electrical Engineering to find some good people. John heard about this. He applied to go to Moore. He started classes there in 1941. The work was easy for him.  His teacher was named J. Presper Eckert. John talked with him often. They talked about building a computer. 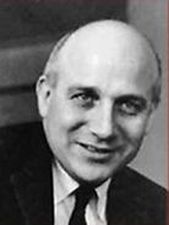 J. Presper Eckert
John finished his studies. Moore hired him as a professor. He taught electrical engineering. He also studied radar and cryptography. Once again, he had to do lots of complicated math problems.

At Moore, there was a whole department that did nothing but calculations. It was called the Ballistics Research Laboratory. Most of the workers were women. They worked for the army. They figured out how far weapons would shoot when aimed at different angles. All day they did math problems. They could never keep up with the work.

ENIAC
John kept working on his idea for a computer. He visited a professor named John V. Atanasoff, and his helper, Clifford Berry. These two men were working on a computer. It was called the ABC, the Atanasoff-Berry Computer. It did only one kind of math problem.

In 1942 John wrote a memo. He explained his idea for a large digital electronic computer. It would do many kinds of problems. He sent his memo to the people at Moore. No one paid much attention.

But the army was interested. They agreed to provide the money for research. Because it was for the army, the project had to be a secret. It was called Project PX. John’s old teacher and friend J. Presper Eckert was hired for the project. He would be the chief engineer. He and John worked closely together.

It took 2 ½ years and $500,000.00. There were many problems. At last the computer was finished. It was called ENIAC. This stood for Electronic Integrator and Computer. ENIAC was unveiled on February 14, 1946. By this time the war was over. The army did not need to measure weapons angles any more. But the project was not a waste of time. ENIAC could do all kinds of calculations. The army had another project in mind. They used ENIAC in their work on the atomic bomb.

ENIAC
Starting a Business
John and Pres Eckert had worked hard on their computer. They filed for a patent on their product. The patent was granted. Later, Moore asked for the rights to the patent. The two men refused. They left Moore on March 31, 1946.

John and Pres started a business. It was located in Philadelphia. Each man had a job. John’s job was to find jobs that computers could do. Pres’s job was to improve their machine. In 1948, they chose a name for their company. They called it the Eckert-Mauchly Computer Corporation.

UNIVAC
John and Pres developed a better computer. It was called UNIVAC. This stood for Universal Automatic Computer. UNIVAC was a success. The Census bureau used it. It was fast and accurate. It saved the Census Bureau money. Other groups began to use UNIVAC, too.

In 1952 two men were running for President. Everyone thought that Adlai Stevenson would win. CBS News fed information about the election into UNIVAC. UNIVAC predicted that Dwight Eisenhower would win. He did. Soon other companies began building computers.

Selling the Business
Even though Pres and John worked hard, they didn’t make any money. They were good scientists. They were not good businessmen. Finally they sold their business. They sold it to the Remington Rand Company. The company hired John to work for them. He would be an adviser. John did not like his job. They didn’t ask him for much advice. In 1959 John left Remington Rand. He started his own business.

Was John Mauchly Really the Inventor of the Computer?
Some people say that John Mauchly should not get credit for inventing the computer. They say that he copied his ideas from Professor Atansoff and Clifford Berry.  Other people say that ENIAC was better than the ABC. It was dependable, and it did more things. Most complicated inventions are the result of the ideas of lots of people. Probably no one person can take credit for the computer.

Reading Level 4.9. Images of Mauchly and Eckert from U.S. Department of Energy. Images of ENIAC courtesy of ushistory.org
Powered by