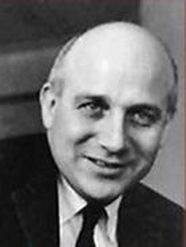 Early Life
J. Presper Eckert was born in Philadelphia. He was an only child. His family had a real estate business. They were quite rich.  Pres was interested in science. He built all kinds of science projects. Once he made a smoke bomb. He put it in the school auditorium. He set the bomb off with a remote control device. No one knew who had done it.

A Career in Science
Pres finished high school. He and his family could not agree on his career. His family wanted him to work in the family business. Pres wanted to study science.
Finally Pres was allowed to study science. He went to the Moore School of Electrical Engineering. This was at the University of Pennsylvania. Pres graduated in 1941.
At this time, America was getting ready for war. The army had developed new weapons.  They were working on new communications systems. The army wanted to find good scientists to work with these systems. They asked Moore to offer a class for these scientists. Pres was hired to teach the class.

Eckert Meets Mauchly
One of the students in the class that Pres taught was John Mauchly.  John had an advanced degree in physics. He was interested in doing a lot of math problems very fast. He had an idea for making a calculating computer. The two men talked about this idea often.  Pres was working on several other projects. He worked with radar, with magnetic fields, and with ultraviolet light. 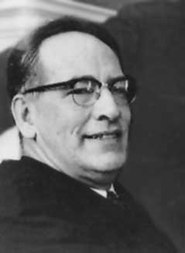 John Mauchly
ENIAC
In 1942 John Mauchly wrote a memo. He outlined an idea for building a large computer. It would be digital. It would be able to do all kinds of calculations. No one at Moore was interested. But the army was interested. They needed to do many calculations in their research. They liked the idea of doing the work much faster. The army provided the funds for this project. Because it was for the army, the project had to be a secret. It had the code name Project PX. Pres became the chief engineer for this project. Pres and John were not allowed to talk about it to anyone.
This led to a problem. Pres was 24 years old. He could be drafted into the army.  He was not allowed to explain why he needed to stay at Moore. The school and the army arranged things so that Pres would not be drafted.
It took 2 ½ years to build the machine. There were many problems. Mice chewed on the wires in the computer. The men had to catch some mice, and give them some wires. They watched to see which wires the mice liked. After that they only used wires that did not taste good to mice.
The army wanted the computer to be fast. They wanted it to do many different kinds of problems. They also wanted it to work all the time. Pres was not happy with the vacuum tubes that he could buy. They did not last very long. He invented a new kind of vacuum tube that lasted 2500 hours. Now the computer would not break down.
The computer was given a name. It was called ENIAC. This stood for Electronic Integrator and Computer. When the project was started, the country was at war. By the time it was finished, the war was over. The army still needed the computer. They used it in their work on the atomic bomb.
ENIAC was good, but it did not store information. The two men worked on making it better.

ENIAC
Starting a Company
When someone invents something new, they may apply for a patent on it. This means that the idea belongs to them. Pres and John applied for a patent on their computer. The patent was granted. Later Moore asked the two men to give their patent to the school. Both men said no. They decided to leave the university.
Pres and John started their own company. It was located in Philadelphia. Each man had a job. John’s job was to find uses for the computer. Pres had the job of making it better.  In 1949 the men produced an improved computer. It was called BINAC. It used magnetic tape instead of punch cards. But it kept breaking down.

UNIVAC
Every ten years, the United States counts all of the people in the country. This is called taking a census. John went to the U.S. Census Bureau. He suggested that they use a computer. It would make their work go faster. It would save them money. The Census Bureau agreed. The machine that Pres and John sold them was called UNIVAC. It used magnetic tape. It was reliable.   In 1952 there was an election for a new president. Everyone thought that Adlai Stevenson would win the election. CBS News tried something new. They fed information about the election into UNIVAC. The computer said that Dwight Eisenhower would win. He did.  This showed what a computer could do.

Selling the Company
Both men worked hard. They could not make money in their business. They were good scientists. They were not good businessmen. They sold their company to Remington Rand. The company hired Pres to work for them. Later the company became Unisys. Pres worked for Unisys until he retired. Pres had continued to invent things. He patented 85 inventions. Pres received several awards for his work.

The UNIVAC computer is now kept at the Smithsonian Institution.

Reading Level 4.3. Images of Eckert and Mauchly from the U.S. Department of Energy. Images of ENIAC courtesy of ushistory.org
Powered by