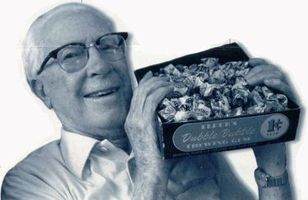 Early Life
Walter Diemer was born and raised in Philadelphia. He attended High School there. He married a lady named Adelaide. They later had two children.
Working Life
Around 1926 Walter Diemer went to work for the Fleer Company, which manufactured candy and gum. Walter worked as an accountant. His office was on the third floor. It was near the office of the president of the company, Gilbert Mustin.  In 1928 the company was not doing very well. The company president was afraid that he would have to lay off some employees before Christmas. He knew that he had to find a way to cut costs.
Experimenting with Gum
Chewing gum is made from a gum base, with added flavor and color. The Fleer Company bought their gum base already made. Gilbert Mustin knew that he could save money if he made his own gum base. He set up a kettle in a lab next to Walter Diemer’s office, and began to experiment.
At this time, the company only had one telephone, and it was on the ground floor. One day, Gilbert Mustin was called to take a telephone call, and he asked Walter to watch his batch of gum while he was gone. Walter was fascinated. Mr. Mustin soon lost interest in making a gum base.  Walter Diemer did not. He had never studied chemistry, so he mixed things by guessing. He worked for about a year. He chewed a piece of gum from each batch to see if it blew good bubbles.
The Fleer Company had made bubble gum once before. The founder of the company, Frank Henry Fleer, made a batch of gum that could be blown into bubbles in 1906. He called it BlibberBlubber.  It was too sticky, and broke too easily, so he gave up on it.
One day Walter Diemer developed a batch of gum that was soft to chew and blew large bubbles. It didn’t stick to his face when it popped. He gave pieces to people all over the office. They blew bubbles and laughed.  Unfortunately, by the next day the batch of gum was hard. It didn’t make bubbles any more.
The Successful Batch
Walter Diemer didn’t give up. He worked for four more months. He added an ingredient called latex, which comes from plants. Once again he developed a gum that blew good bubbles. He flavored it with wintergreen, peppermint, vanilla, and cinnamon. These same flavors are used today.
In December 1928 Walter Diemer decided to mix up a big batch of his gum. He put 300 pounds of ingredients into the company’s big mixers. The people who worked the machines were worried. They thought the blades of the mixing machines would break. The gum mixed well, and it was good to chew. Walter had a successful batch of bubble gum, but he had forgotten to give it any color.
The next day Walter Diemer had another 300 lb. batch mixed up. The only food coloring in the factory was pink. Walter used it. That is why most bubble gum today is pink. It was time to test the bubble gum on people outside the company. The factory cut the gum into pieces, and wrapped them using the machine that usually wrapped saltwater taffy.  Gilbert Mustin named the gum Dubble Bubble.
On December 26, 1928, Walter Diemer sent 100 pieces of the new gum to a small candy store at 26 Schenectady Street in Philadelphia. The gum sold for a penny a piece. By the end of the afternoon, the store was sold out. Everyone was surprised.
Dubble Bubble gum was so successful that the Fleer Company sold over a million and a half dollars worth of gum in the first year. Up until this time, Tootsie Rolls had been the best-selling one-cent candy. Within three months, other companies were making bubble gum too. Walter Diemer never patented his invention.
Marketing the Gum
Walter Diemer wasn’t an accountant at the Fleer Company any more. Because of his discovery, he became a senior vice president of the company. Because bubble gum was so new, he had to teach salesmen how to blow bubbles so that they could demonstrate their product as they went to each new store. The next year, 1929, was the beginning of a great economic depression. Even when people had very little money, though, they could still spend a penny on bubble gum. Walter Diemer was kept busy looking for other factories on the East Coast where Fleer could make gum. The company had a hard time wrapping the gum fast enough to keep up with all the people who wanted to buy it.

Later Life
By 1970 Walter Diemer was a senior vice president, and member of the Board of Directors of Fleer Corporation. He retired in 1970, but stayed on the board of directors for 10 more years.  Walter and his wife Adelaide moved to Ocean City, New Jersey.  Both of Walter and Adelaide’s children died in 1986. Adelaide Diemer died in 1990.
Walter Diemer moved to the Lancashire Terrace Retirement Village in Lancaster, Pennsylvania. He was known around the complex as the man who rode a big tricycle and gave out bubble gum to children.  In 1996, at the age of 91, Walter Diemer married again. He married Florence Freeman Kohler, who lived in the same Retirement Village. Florence was an artist.