This Mercer mosaic represents the wampum belt given to William Penn by Tamanend at Shakamaxon. Image courtesy of Mrs. Maureen Book
Fast Facts
Tamanend was the chief of the Lenni Lenape tribe who made the first treaties with William Penn.
He is remembered as a man of honor.
The name Tamanend means “The Affable.”

The Lenni Lenape
The Native Americans who lived in the area where William Penn made his settlement were known as the Lenni Lenape. The Europeans called them the Delaware, after the English name for the nearby river.

Tamanend and His People
We do not know anything about Tamanend’s early life. We know that he lived along the banks of the Neshaminy creek. His tribe lived in families in small villages. They hunted deer and beaver. They planted corn, beans, and squash.

One man who wrote about Tamanend was Rev. John Heckwelder. He was a Moravian missionary. He never met Tamanend, but he learned about him from some of the early settlers and the older native people. He wrote:

“The name of Tamanend is held in the highest veneration among the Indians. Of all the chiefs and great men which the Lenape nation ever had, he stands foremost on the list. But although many fabulous stories are circulated about him among the whites, but little of his real history is known… All we know about Tamanend, therefore, is that he was an ancient Delaware chief who never had his equal. He was in the highest degree endowed with wisdom, virtue, prudence, charity, affability, meekness, hospitality, in short with every good and noble qualification that a human being may possess. He was supposed to have had an intercourse with the great and good spirit, for he was a stranger to everything that is bad.”

William Penn Comes to America
The King of England gave William Penn land in the New World. William Penn was a Quaker. The Quakers were persecuted in England. Penn wanted to make a place where people could worship freely. He decided to make Pennsylvania that place. He arrived in Pennsylvania on October 29, 1682.

William Penn respected the Native Americans. He visited them and asked for their friendship. He tried to learn their language. When he wanted land, he made an agreement to pay for it. He also made it a rule that any Native Americans on land that he had bought should not be disturbed. He believed that the settlers and the native people could live together in peace. 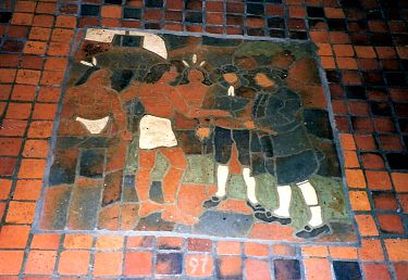 In this mosaic by Henry Mercer, William Penn is seen purchasing land from some Native Americans. Image courtesy of Mrs. Maureen Book.
Meetings with William Penn
William Penn visited Tamanend in Perkasie (where Silverdale is today) in May of 1683. Tamanend and his son Yaqueekhon offered him a feast of venison. Penn joined in with the dancing that followed. William Penn had many meetings with the local chiefs.

On June 23, 1683, Tamanend and some other chiefs came to Philadelphia to meet with William Penn. Penn asked to buy four pieces of land. He had made deeds to show that he was buying the land.  The interpreter read the deeds to the Native Americans. Tamanend and the other chiefs signed the four deeds. These men each had their own mark. Tamanend’s mark was a coiled snake.

Tamanend divided these things among his people.

Shakamaxon
Around this same time several chiefs, including Tamanend, met William Penn at Shakamaxon. This was a meeting place where a huge old elm tree grew. The elm became known as the “Treaty Elm.”

“We have come here with a hearty desire to live with you in peace… We believe you will deal kindly and justly by us, and we will deal kindly and justly by you…We will be as one heart, one head, one body; that if one suffers, the other suffers; that if anything changes the one it changes the other. We will go along the broad pathway of good will to each other together.”

Tamanend, through an interpreter, said:

“We will live in love with William Penn and his children, as long as the creeks and rivers run, and while the sun, moon, and stars endure.”

Tamanend gave Penn a belt of wampum. It had pictures of two men on it. The men’s hands were clasped together. One was a man in a hat, (Penn) the other a Native American. This belt was a symbol of friendship.

William Penn returned to England in 1683.

Later Meetings
In May 1692 Tamanend went to the officials in Philadelphia. He complained that he had not been paid enough for his land. He might not have had enough of some items to distribute them equally. He asked for 9 guns, 10 matchcoats (woolen jackets with no sleeves) and 10 blankets. Eventually he was given 6 guns, 10 blankets, 10 kettles, some bread, and some beer.

Tamanend attended two more councils. The first was in 1694. The second was held on July 5, 1697. At this time Tamanend agreed to sell the land between the Pennypack Creek and the Neshaminy Creek, as far as a horse can travel in two summer days. For this agreement, Tamanend received more goods, and a horse.

Ownership of Land
When William Penn and his agents said that they were buying land, they meant that it belonged to them. Penn could sell the land to other people. Whoever owned the land had the right to that land. This was a different way of thinking than the Native American way. The native peoples thought that they were giving rights to share the land to the settlers. They did not understand that the settlers were taking it away. Even though William Penn insisted that the native people be allowed to share the land, as time went on people did not respect this rule. After Penn died, the leaders who followed him did not have the same generous and peaceful ways.

Tamanend’s Death
It is believed that Tamanend died in 1698. There is no record of him after this time. He attended no more councils. A letter sent to England by the Lenape chiefs in 1701 did not have his signature on it.

No one is sure where Tamanend is buried. Some people believe that he was buried in the “Tammany Burial Ground” near Chalfont, Pa. Henry Mercer once researched the site, and planned to put a monument on Tamanend’s grave. He later changed his mind. He was not sure that Tamanend was buried there at all. 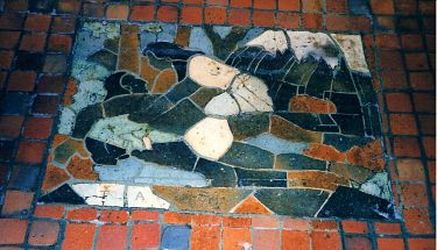 The Death of Tammany is a mosaic created by Henry Mercer. Mercer portrays Tamanend dying by the Neshaminy Creek. Image courtesy of Mrs. Maureen Book
Where we see his name today
In Warrington, Pa. Tamanend Middle School is part of Central Bucks School District.

In Southampton, Pa. there is a park called Tamanend Park. A cluster of boulders is marked with the date 1683, and the names of five members of the Lenni Lenape. One of the names is Tamanend.

In New Jersey there is a Mount Tammany.

In Wayne County, Pa. is the St. Tammany Flats.

The wampum belt that Tamanend gave to William Penn at Shakamaxon still exists. The Penn family kept it until 1857. Then Granville John Penn gave it to the Historical Society of Pennsylvania, where it is today.

Tamanend as a symbol
The name of Tamanend has a great deal of history attached to it. None of it had much to do with who Tamanend was. Here are some of the things linked to his name.

1. St. Tammany. People in England had their patron saints. They had special days for Saint Andrew and Saint David. During the Revolutionary War some people declared Tamanend the patron saint of America. They formed Sons of Tammany societies. May 1 was chosen as Saint Tammany Day. On this day there were great celebrations. The festivals were especially popular with the army. Sometimes the festivals got very wild. In 1812 the army banned the celebration of St. Tammany day. After a while the festival went out of style.

2.Tammany Hall. In New York City in 1789 William Mooney started a society called the Society of St. Tammany. It was supposed to be a society to help people. By 1804 it had become a political society. In 1867 William “Boss” Tweed became the head of the society. He and the other members met in a building on Fourteenth Street called Tammany Hall. There was a statue of Tamanend in an arch on the top floor of the building. 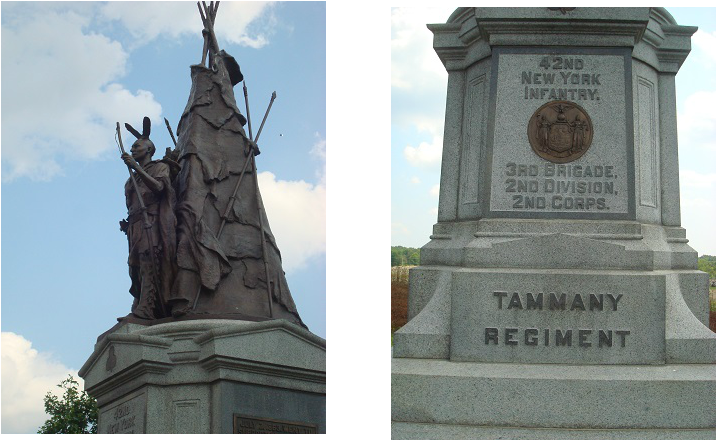 Tammany Regiment Memorial, Gettysburg, Pa. Photo M. Yates
4.Tamanend statue at Annapolis. The USS Delaware was a wooden war ship. It was built in Norfolk, Virginia, and launched in 1820. Its figurehead was a bust of Tamanend. The USS Delaware was sunk in 1861, but somehow the figurehead was rescued. It was taken to Annapolis, Maryland, along with other wooden figureheads, to the Naval Academy there. Midshipmen started using the statue as a good luck charm. They hoped that it could help them to get good grades.  Soon no one remembered who the statue was. They called it Powhatan, then Tecumseh. Eventually the wooden figure began to rot and fall apart. In 1906 the members of the Class of 1891 had the statue carefully cast in bronze. The bronze statue was presented in 1930. It stands today at the Naval Academy.