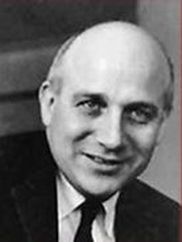 Fast Facts
J. Presper Eckert was a scientist. With John W. Mauchly he developed the first multi-purpose computer, known as ENIAC, and a number of other computers including UNIVAC.

Early Life
J. Presper Eckert was born in Philadelphia. His family called him Pres. He was an only child. His family was quite rich. They were friends with the President, and with the famous actor Charlie Chaplin. Pres was a child who loved science. He built a crystal radio set on a pencil when he was 8. He designed a magnetized boat when he was 12. He entered it in a hobby fair. It won first prize. Pres also used science for practical jokes. When he was in high school he set a smoke bomb to go off on the stage of the auditorium. He controlled the bomb with a remote control in his pocket. He set the bomb off while sitting in the audience.

Education
Pres was so good at science that he took college level math classes while he was still in High School. He wanted to study science. His family had a real estate business. They wanted Pres to join the business.  Pres applied to MIT. The school accepted him. His mother would not let him go. She wanted him to stay close to home. Pres went to the Moore School of Electrical Engineering at the University of Pennsylvania instead. He graduated in 1941.
After his graduation he continued at Moore to work toward his Masters Degree. The country was aware that there might soon be another war. New electronic weapons and communications systems were being developed. The armed forces were looking for engineers who could operate these weapons and systems. The US Army gave Moore School a contract to teach a 10-week course to graduates with a math or physics degree. The course was Electrical Engineering for Defense Industries. Pres had designed some war-related devices. He was bright. Moore hired him as the lab instructor for the course.

Eckert Meets Mauchly
John W. Mauchly had a PhD in Physics. He had been working in research that required thousands of computations. He wanted to find a faster way to do them. Even though he was over-qualified, he signed up for the course. Since the work was easy for him, he had the time to talk with the lab instructor. He told Pres about his idea to create a calculating computer. The two discussed the idea often. 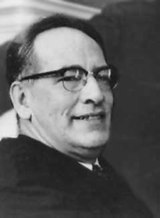 John W. Mauchly
Pres was very interested in the possibility of the computer, but he had other projects as well. He worked with ultraviolet light, using it to measure metal fatigue. He worked on a way to measure small magnetic fields. This work could be used to develop a marine mine detector. Next he worked on the electronics of radar. He worked on target locating and following equipment.

ENIAC
In 1942 John Mauchly wrote a memo. In it he outlined his idea for building a digital electronic computer. It would be on a very large scale. It would be able to perform a variety of calculations.  No one at Moore was much interested. In 1943 the army showed an interest. They provided a contract to fund the building of the computer. Because it was military, it was secret. Its code name was Project PX. Pres and John were not allowed to discuss their work with anyone. They were not allowed to publish any papers.
This led to a unique problem. Pres was 24 years old. He was eligible for the draft. Since his work was secret, there was a risk that he would be drafted. This would take him away from work that was a high priority for the army. The school and the government worked together to keep Pres from being drafted.
They called the machine ENIAC, or the Electronic Integrator And Computer. It took 2 ½ years to plan and build. There were a lot of problems. One interesting problem was mice. Mice were gnawing on the wires of the computer. Pres and John solved this problem by catching some mice. They waited until they were hungry, and then offering them a variety of wires to chew on. The ones they ate were rejected as raw materials. The scientists only used wires that were not tasty to mice.
The Army wanted three things out of this computer. It should do a lot of computations in a short time. It should be able to do a variety of computations, not just one. It also needed to be dependable. Pres was the chief engineer. He was in charge of designing the electronic circuits. At this time vacuum tubes were undependable and had short lives. Pres solved the problem and developed vacuum tubes that would last 2500 hours. His careful designs made the machine a reliable one.
ENIAC weighed 30 tons. It had 18,000 vacuum tubes and 6,000 switches. It had 4000 red neon lights that blinked. It could perform 5000 additions in one second, and 300 multiplications in one second. That is slow for now, but fast for then.

ENIAC
Using the New Computer
When ENIAC was planned, the army hoped to use it to calculate the trajectories of bombs and missiles. They had people doing these calculations by hand, and were far behind in the figures they needed. But ENIAC took too long to build. By the time it was finished, the war was over. It did help with calculations related to the hydrogen bomb. Because it was multi-purpose, it was still useful. Now that the war was over, scientists were interested in its power for another top-secret project.  It was immediately used in the calculations needed in another project. This was the development of atomic weapons at Los Alamos.
ENIAC was good, but it could be better. It had no stored program. The two men worked on improvements. Pres gave a lecture on a model called EDVAC. It was an idea that never worked out.

Starting a Company
Usually the inventor of something new applies for a patent. If the work is done at a university, often the school holds the patent. Since the army paid for ENIAC, it didn’t really belong to the school. John and Pres were allowed to apply for a patent. This was a lot of work. The patent was granted. After the war universities set stricter policies for patent rights. The school asked Pres and John to give the patent to them. Both men refused.
Pres and John started their own company. It was called the Electronic Control Company.  It was situated in downtown Philadelphia. Pres Eckert and John Mauchly were a wonderful team. Pres Eckert was the gruff, no-nonsense member. He could engineer anything that Mauchly could imagine. John Mauchly was the friendly, outgoing one. Each man had a job. John’s job was to find uses for a computer. Pres had the job of creating the new, improved machine.

BINAC
In 1949 the pair produced a new computer called BINAC. It was designed to be a commercial computer. It used magnetic tape instead of punch cards. Unfortunately, it was not reliable.

UNIVAC
John talked with the US Census Bureau. They were soon to take another census. He knew that a computer would save them money. It would also make their work go much faster. He offered to sell the Census Bureau a new computer. They agreed. The computer that they built this time was called UNIVAC. The letters stood for Universal Automatic Computer. This model was a big step forward. UNIVAC used magnetic tape. It was reliable. It had many commercial uses.
In 1952 there was a Presidential Election. Adlai Stevenson was running against Dwight D. Eisenhower. All of the opinion polls said that Stevenson would win. He was the favorite. CBS News decided to try something new. They fed election data into UNIVAC. UNIVAC predicted that Dwight Eisenhower would win, by many votes. Walter Cronkite, the news anchor, did not report this news. He was sure that it was wrong. But after the election, UNIVAC was proved right. Eisenhower won by a large margin.

Selling the Company
Even though both men worked hard, they could not make their business pay. The computer business was very new. It was hard to estimate how much something would cost to make. Pres and John were excellent scientists. They were not businessmen. Finally, they sold the company to Remington Rand. The company was renamed the Univac Division of Remington Rand. Pres stayed on with Remington Rand as an executive. Remington Rand merged with Burroughs Corporation. It was renamed Unisys. Pres stayed through the transition. He worked for Unisys until he retired. After his retirement he was a consultant for the company.

J. Presper Eckert had a large number of patents. He patented 85 inventions between 1948 and 1966.

Today the UNIVAC computer is kept at the Smithsonian Institution in Washington D.C.


Reading Level 5.0. Images of Eckert and Mauchly U. S. Department of Energy. Images of ENIAC courtesy of ushistory.org