This post stands beside Route 611 in Plumsteadville. The inscription reads, "Edward Marshall Walker of Pa. Sept 20 1737 Gov Wm Penn" This marks the spot where Jennings stopped walking
Early Life
Edward Marshall was born in Philadelphia County in 1710. He had four brothers and sisters. Edward was the middle child. He was very strong and athletic. He worked for a surveyor named Benjamin Eastburn. Surveyors measure out land. Edward’s job was to hold the measuring chain. In 1735 Edward married Elizabeth Oberfield. He and his brothers wanted to settle on some new land. It was above the Tohickon Creek. They recorded a claim to the land in 1737.

Owning the Land
The land that Edward Marshall and his brothers wanted to settle belonged to the people of the Lenni Lenape (Delaware) tribe.  Settlers wanted to move there anyway. The governor of the colony was James Logan. He and two of William Penn’s sons, Thomas and John, wanted to get the rights to this land.
The Penn brothers and James Logan met with the Lenni Lenape.  They showed them a treaty that they said had been signed by William Penn. It allowed them all the land that could be walked over in one and one half days. The Lenni Lenape did not remember this treaty, and were confused. They asked for time to talk with their elders about this.

A Trial Walk
Thomas and John Penn wanted to see how far a man could walk in a day. They asked for three strong men to do a trial walk. Edward Marshall was chosen as one of the men. He was 22 years old. The other two men were James Yates (sometimes spelled Yeates) and Joseph Doane. James Yates was picked because he was very strong and a good jumper. Joseph Doane was not a strong walker. His job was to observe the walk and report back to the Penns.
Timothy Smith was the sheriff of Bucks County. He organized the walk. He met the three men outside the Friends Meeting House in Wrightstown. At his signal, the men started to walk. They walked quickly. Edward Marshall carried a hatchet. He threw it from one hand to the other as he walked. This helped balance his walking. He could also use it to cut away brush and branches that might be in his way. Sheriff Smith followed on his horse.
Joseph Doane was tired very soon. The other two men walked all day. As they walked, Timothy Smith marked their trail. At the end of the day they had walked almost 48 miles. They camped overnight, and went home the next day.

Permission to Walk the Land
The Penn brothers and James Logan met again with the Native Americans. They met at James Logan’s house, called Stenton. The meeting was on August 25, 1737. Chief Nutimus spoke for the group. He said that their people knew nothing about the treaty. He asked for more time to talk about it. Thomas Penn gave him a few hours. After lunch he had to give his answer. The Lenni Lenape finally agreed to allow the walk to happen. They expected that it would be a slow walk, with stops to eat and hunt. But the treaty that they signed did not say that. It said that the land should be “walked, traveled, or gone over.”

The Walking Purchase
The date for the walk was chosen. It was set for September 19, 1737. The three walkers would be Edward Marshall, James Yates, and Solomon Jennings. Jennings was from the Bethlehem area. A number of people were invited to go along on the walk. Sheriff Smith brought several men, including Benjamin Eastburn. The Lenni Lenape sent three men. The day was to be measured from 6 a.m. to 6 p.m. Sheriff Smith was the timekeeper. Each walker would be paid five pounds (money) in cash. The man who walked the farthest was promised 500 acres of land in the new area.
The walkers started from a chestnut tree at exactly 6 a.m. They walked quickly. The Native Americans complained that they were running. No one listened to them. The three men walked quickly all morning. They traveled almost 8 miles in the first two hours. James Yates was in first place. Edward Marshall, carrying his hatchet, was in second place. Solomon Jennings limped behind the others. Sheriff Smith and some others were riding horses. When the Lenni Lenape were tired, Sheriff Smith and the others took them up on their horses.
After six hours they reached the spot where Durham Road (Route 413) meets Easton Road (Route 611) today. Solomon Jennings collapsed. He stayed behind.  Edward Marshall and James Yates walked 28 miles. They were given 15 minutes to rest and eat. 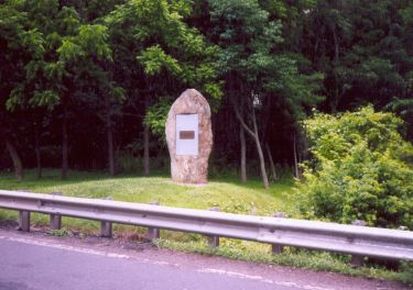 At this spot the men stopped for their fifteen minute lunch 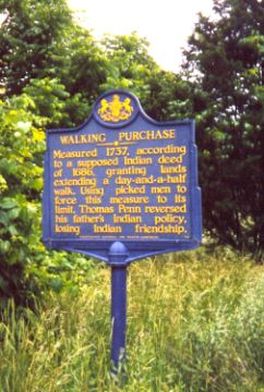 A nearby Highways of History sign reads, " Walking Purchase. Measured 1737, according to a supposed Indian deed of 1686, granting lands extending a day-and-a-half walk. Using picked men to force this measure to its limit, Thomas Penn reversed his father's Indian policy, losing Indian friendship."
They continued to walk until 6:15 p.m. (to make up for the lunch break.) Then they stopped. Edward Marshall threw his arms around a tree. He was exhausted.  The men ate a dinner of bacon, corn meal, and biscuits. Sheriff Smith posted a guard. He was afraid that the Native Americans would attack them. They did not. The walkers slept deeply.
The second day’s walk was supposed to start at 6 a.m. The weather was cold. It was raining. The horses had wandered off during the night. It took two hours to get them back. The walkers started at 8 a.m. Three Native American observers were there again. They walked a short way. When they saw how fast the men walked, they were disgusted and left.
Marshall and Yates walked until they reached the Tobyhanna Creek. The water was fast and deep.  Edward Marshall crossed first. When James Yates tried to cross, he fell on his face in the water. Marshall was afraid he would drown. He pulled Yates’s head above water and dragged him out of the creek. James Yates had hurt his leg. He also could not see. Edward Marshall waited to make sure that someone would take care of him. Then he walked on.
Edward Marshall walked more slowly now. The air was cold and it was hard to breathe. At 2 p.m. the Sheriff called “Time!” Edward Marshall stopped walking, and threw his hatchet another fifty yards. He rested on the ground. The surveyors marked the place where the walk had ended. They marked five trees with the date and the names of Thomas and John Penn.

The land is surveyed
The surveyors measured the land that had been bought by the Walking Purchase. Since the walk had gone to the west, they needed to draw a line back to the Delaware River. It would have been fair to draw the line due east. They did not do this. They drew the line at a right angle to the river. This gave the Penns much more land. It was the best hunting land. The Lenni Lenape did not want to give up this land. They were angry. They felt that they had been cheated.

Edward Marshall is not paid
After the walk Edward Marshall went back to his family. They lived in a farmhouse in Tinicum Township. He waited for his payment of 500 acres of land. No one paid him. In August 1741 he went to see Thomas Penn. He asked for his payment. Thomas Penn was rude to him. He offered him another five pounds (money). Edward Marshall was angry and left. He never was given the land he was owed. In 1752 the family moved to Mount Bethel Township, near Easton. Edward farmed the land, and worked for the surveyors.

Dangerous Times
In 1755 Native Americans attacked some settlers living near Easton. There were several attacks. In 1756 Edward Marshall’s farm was attacked. He was not at home. He was cutting logs some miles away. Five of his children were in the yard at the time of the attack. They ran away. One daughter, Catherine, was wounded in the shoulder. She was 14 years old. She hid in the creek, and stopped the bleeding in her shoulder with mud. The attackers found Edward’s wife in the house. They took her away with them. Later they killed her.
The farm was attacked again in 1757. Edward Marshall was away at work when it happened. His son Peter was killed. After that many farms and settlements were attacked. Benjamin Franklin was sent to defend the area. He and his men built Fort Allen. They left a few men to defend it. The rest went back to Philadelphia.

A New Family
Edward Marshall married again in 1758. His new wife was Elizabeth Weiser. She was 30 years old. Her father had been killed in the raids.  Edward Marshall was angry that so many of his family had been killed. He wanted revenge. It is said that he killed over 20 Native Americans.
Edward and Elizabeth had two sons. They were named Frederick and William. Edward still had eight children from his first marriage. They all lived together. After some years they moved back to the farmhouse in Tinicum Township. Edward did not feel safe. He was afraid that the Native Americans would attack his family because he had helped with the Walking Purchase.

The Revolutionary War
During the Revolutionary War Edward was on the side of the settlers. His sons were in the militia. Some people say that Edward and his sons helped collect the boats for George Washington to use when he and his soldiers crossed the Delaware. We do not know if this is true. It is true that Edward Marshall took an Oath of Allegiance on November 30, 1777. He promised to be true to the new United States.

Later Life
Edward’s daughter Catherine married a man named William Ridge. They had 12 children. Edward’s son Martin had a home near the Tinicum creek. Edward Marshall stayed in his home on Marshall’s island. He was healthy. When he was 79 years old he became sick. His lungs were infected. He died on November 7, 1789. He was buried in a family graveyard. This graveyard was near his son Martin’s house.

Where We See His Name Today
Some stone monuments mark the path of the walking purchase. Edward Marshall’s name is carved on them.

Marshall’s Island is now called Eagle Island. It belongs to the Boy Scouts of America