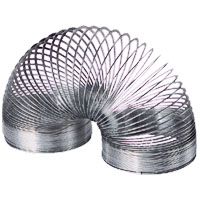 Fast Facts
Betty James helped her husband to develop and market the Slinky. She continued in this work on her own, and established a successful business with a quality product.

Early Life
Betty James was born on February 13, 1918. She lived in Altoona.  She loved to play when she was a little girl. Betty went to Altoona High School. She went to college for two years at Penn State University.

An Accidental Invention
In 1940 Betty married Richard James. Richard was a naval engineer. He worked for the Cramp Shipyard in Philadelphia. Sailors on ships used measuring instruments. These were hard to read, because the boat never held still. When the boat rocked, the reading on the instrument would change. Richard’s job was to find a way to keep the instruments still. He experimented with different springs. He thought they might keep the instruments steady. One day, one of his springs fell off a table. It bounced around. Richard was excited. This spring would make a good toy! Richard took the spring home, and showed it to Betty. He played with the spring, to see what it would do. He got it to walk down stairs. Betty wanted a good name for the new toy. She looked in the dictionary. Betty found the Swedish word “Slinky.” It meant smooth and flowing. Richard and Betty liked this word. They used it to name their new toy.  Richard got a patent for his product.

Showing off the Product
Betty and Richard wanted people to see their new toy. They looked for a way to show it off in public. In 1945 the Gimbels Department Store in Philadelphia invited them to the store. It was November. It was a cold, miserable evening. They had 400 Slinkys to sell. Richard was afraid that no one would buy one. He gave a friend a dollar. He asked him to buy a Slinky. This way at least one would sell. Richard didn’t need to worry. People who saw the Slinky loved it. The 400 Slinkys sold in 90 minutes. After that, many people wanted Slinkys. People saw them at the 1946 American Toy Fair. They were very popular there.

Manufacturing the Slinky
Richard and Betty borrowed $500.00. They started a company. They called it James Spring & Wire Company. Richard made a machine. He designed it himself. When it was finished, it made Slinkys. They were made of 80 ft of wire. The wire came from Sweden. In 1956 the company changed its name. It became James Industries.

The Business Grows and Changes
Richard moved to Bolivia in 1960. Betty stayed behind. She had six children.  Betty worked hard. She cared for her family. She paid the bills. She kept the business going. Betty needed a place where it would cost less to make her toys. Philadelphia was too expensive. Betty looked for another place to go. The small town of Hollidaysburg welcomed her. She moved her factory there. Betty was a good businesswoman. She found another way to cut costs. She stopped using Swedish steel. She found an American-made, silvery metal. It was not as expensive, and it worked very well.

People saw and heard advertisements for the Slinky. A catchy jingle helped people remember the Slinky.

Soon there were other Slinky toys. The Slinky Dog and other Slinky pets were popular. Crazy Eyes were glasses with springs attached to silly eyes. People liked them too. Slinkys for little children were made from plastic.

In 1998 the Slinky brand was sold to Poof Toys.

Slinky Toys Today
Slinkys are manufactured in Hollidaysburg today. The factory still uses Richard’s machinery. Hardly any design changes have been made. One small change was to crimp the ends of the Slinky. Now children cannot cut their hands on the ends. The Slinky started as a toy, but people have used it for many other things. Soldiers in Vietnam threw a Slinky into a tree. It made a good radio antenna. Slinkys are good tools for physical therapy. Students have used Slinkys to imitate sound waves in Physics class. Slinkys have even been used to pick pecans.

One of the early space missions took a Slinky along. They discovered something interesting. In space, a Slinky will not “slink!”

Walt Disney Studios made a movie called  “Toy Story.” The Slinky dog was one of the characters. Now everyone knows what a Slinky is. It is even in the National Toy Hall of Fame ® at Strong Museum, Rochester, New York.

Later Life
Betty James was made a member of the Toy Industry Hall of Fame in 2001. She lived in Hollidaysburg until her death on November 20, 2008.