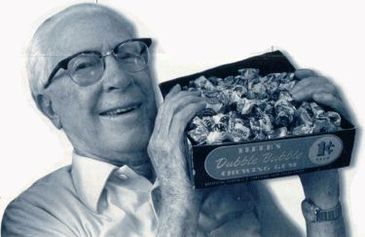 Early Life
Walter Diemer was born in Philadelphia in 1904. He grew up in Philadelphia. He went to High School there. He married a lady named Adelaide. They later had two children.
Working Life
Walter went to work for the Fleer Company in about 1926. The Fleer Company made candy and gum. Walter worked as an accountant. He kept track of the company’s money.  The President of the Fleer Company was Gilbert Mustin. Mustin was worried because the company was not making much money. He was afraid that some of the people who worked for Fleer would lose their jobs.

Experimenting with Gum
To make chewing gum, the Fleer Company bought a mixture called the gum base. They added flavor and color to it. Gilbert Mustin thought that it would be cheaper if he made his own gum base. He set up a kettle near his office, and began to experiment.
Walter Diemer's office was next door. He watched Mr. Mustin work. He was very interested. After a while, Mr. Mustin gave up. Walter Diemer did not. He was not a chemist, so he guessed at the ingredients. Walter tried many combinations. He worked for about a year. He tried to make a gum that could blow bubbles. Each time he made a batch, he would chew a piece to try it out. One day a batch of gum blew beautiful bubbles. Everyone was excited. By the next day, this gum was hard. It did not work any more.
Walter did not give up. He worked for four more months. He added latex to his formula. At last he created a soft gum. It could blow a bubble.
The Good Batch
In December of 1928 Walter Diemer asked the people in the factory to make a batch of his gum. He wanted a big batch. He put in three hundred pounds of ingredients. He flavored it with wintergreen, peppermint, vanilla, and cinnamon. He colored it pink. That was the only color that he had.  The workers were afraid that the gum would break the mixing machine. It did not. The gum mixed well. It was cut into pieces They wrapped the gum with a machine. On December 26, 1928, Walter sent 100 pieces of gum to a local candy store. The gum cost one penny. The gum sold out in one afternoon. It was a success.
The gum was cheap. It tasted good. It was fun. Many people bought it. People could afford it, even when times were bad. The Fleer Company had to open more factories to make gum. Walter had to teach the salesmen how to blow bubbles so that they could show off their product.
Walter Diemer became a vice president of the company. Later he joined the Board of Directors. He worked for the Fleer Corporation until 1970. Then he retired.

Later Life
Walter and his wife moved to Ocean City, New Jersey.  In 1986 both of the Diemers' children died. In 1990 his wife Adelaide died.
Walter Diemer moved to a Retirement Village in Lancaster, Pennsylvania. He rode a big tricycle around the area. He gave bubble gum to children.  When Walter was 91, he married again. He married an artist named Florence Freeman Kohler.  Walter Diemer died on January 9, 1998.