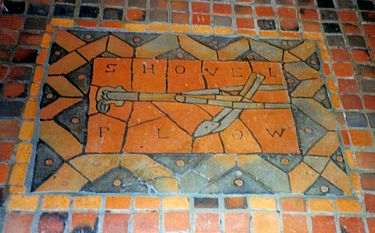 Shovel Plow
When land was newly plowed, the settler would plow with the shovel plow, whose horizontal
blade would not stick under roots like that of a regular plow. 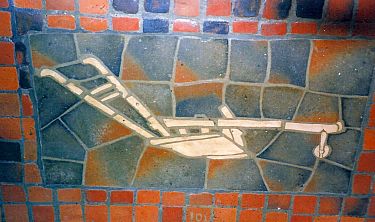 Wooden Plow
This type of plow was commonly used in the Eastern United States
before 1800. 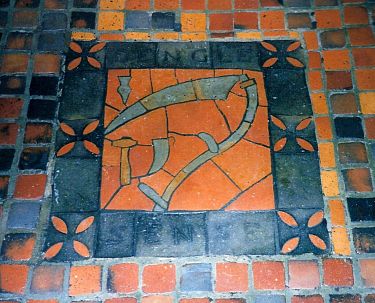 Dutch Scythe
This type of scythe was brought over to America from Germany. To sharpen this scythe,
men hammered the blade with a dengle hammer on a small anvil, then sharpened it with
a sandstone whetstone soaked in vinegar. The word "DENGLE" on the tile refers to the
sound of the hammer. 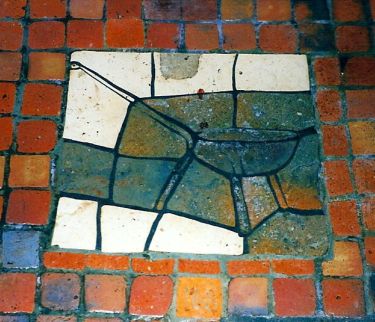 Skillet
A skillet was a large thin cup of hammered iron with a long handle and three long legs.
It could stand in the embers of the fire, and stew could be made in it. Used until
about 1840. 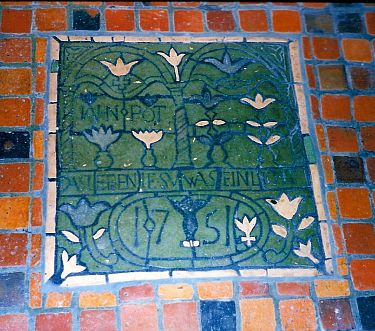 Stove Plate
Between 1720 and 1760 iron stoves were made with flat plates, and used for heating the home.
There was no stovepipe or door. Fuel was put into the stove through a hole in the wall, and the
smoke came out the same way. The heavy stove plates were often heavily decorated. This one
is decorated with tulips. It has the maker's name on it, and the year 1751. The words
"DAS.LIEBEN.JESU.WAS.EIN.LICHT" mean "The life of Jeus. What a light." 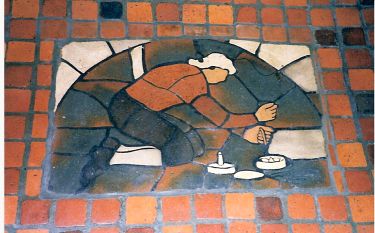 Tinderbox
The tinder box was a small tin box containing a flint, a piece of steel, small scraps of rag, some
sulfur-tipped matches, and a candle. Striking the flint on the steel to make a spark, the user
would direct the spark onto the rag. The match could be lit from the burning rag, and used
to light the candle. When percussion matches [matches that could be struck on a surface]
were invented around 1830, tinder boxes went out of use.