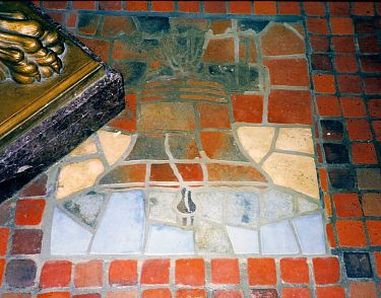 The Liberty Bell
The Liberty Bell has become a national symbol of freedom. It was cast in 1753. Written on the bell are the words, "Proclaim Liberty throughout all the land unto all the inhabitants thereof." 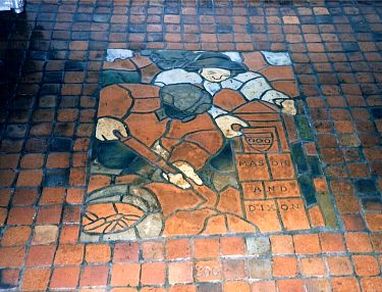 Mason and Dixon's Line
Charles Mason and Jeremiah Dixon laid out the border between Pennsylvania and Maryland with a series of posts marked with the shields of Lord Baltimore and William Penn. This mosaic shows two workmen setting one of the posts into the ground. The crest  with three balls carved on the post represents the seal of William Penn. [see Pennsylvania Insignia in this section.] 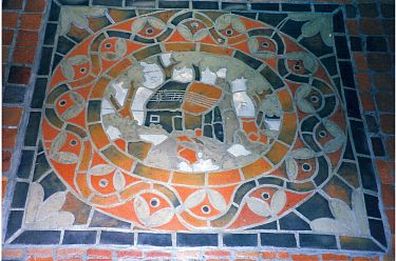 Stephen Collins Foster
This mosaic shows a log cabin by a river. On its roof are stamped the first musical bars of the song "Swannee River"
[also called "The Old Folks at Home."] The initials SCF stand for Stephen Collins Foster, who wrote many
well-known songs based on African American music. 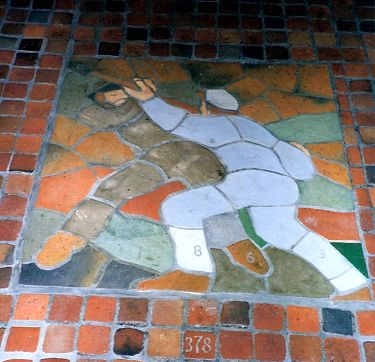 Gettysburg
The Battle of Gettysburg in July of 1863 has been called the turning point of the Civil War. 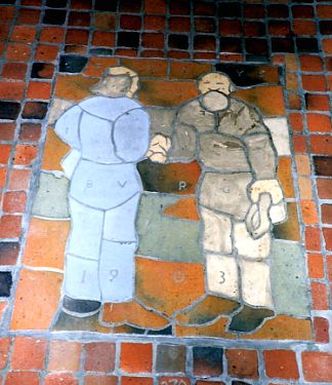 Reconciliation of North and South
In 1903 surviving veterans of the Civil War met on the battlefield at Gettysburg. This mosaic shows two farmers,
once soldiers and enemies, shaking hands.