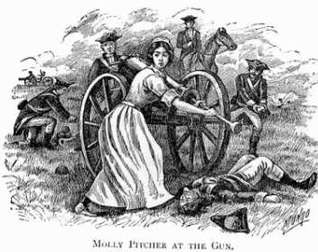 Fast Facts
Mary Ludwig Hays McCauley was “Molly Pitcher” who fought bravely at the Battle of Monmouth in the Revolutionary War.
Born: October 13, 1754, near Trenton, NJ
Married:1. John Caspar Hays on July 24, 1769
Son: John L. Hays, born 1783.
2. John McCauley (sometimes spelled McAuley
or  M'Kolly)  in  1792
Died: January 22, 1832, in Carlisle Pa.
Early Life
Mary Ludwig’s father was named John George Ludwig. He was a dairy farmer. He had a farm near Trenton, New Jersey. Mary was born there on October 13, 1754. She lived with her parents and worked on the farm until she was fifteen years old.

Move to Carlisle
When Mary was fifteen, her father found her a job. To do this job, she needed to move to Carlisle, Pennsylvania. This was more than 100 miles from home. Mary went to the home of Dr. William Irvine. She washed clothes, cleaned the house, and took care of the family’s children. She sent money home to her parents.

Mary met a man named John Hays. He was a barber in Carlisle. They were married in July 1769.

Life During the War
The Revolutionary War started in 1775. Many men joined the army. Mary's husband joined the army in December 1775. He joined again in January 1777.  He joined the Artillery. His job was to work with the cannons.

Mary decided to go with her husband. She became a camp follower. She was one of the people who followed behind a group of soldiers. Mary helped with cooking and washing clothes. She took care of people who were sick or hurt.

The Battle of Monmouth
The British held the city of Philadelphia. In 1778 they decided to retreat to New York City. General Washington sent troops after them. John's regiment was sent to Freehold, New Jersey. They fought the British there.

It was a very hot day. Mary carried water to the thirsty men. She carried it in a pitcher. Soon the men called to her for water. They called her “Molly Pitcher.” John was so hot that he collapsed. Mary stopped carrying water. She took over her husband's cannon. She loaded and fired it for the rest of the battle.

Mary was wearing a long dress. A cannonball shot off the bottom of her petticoat. Mary was not hurt.

Some people say that George Washington saw Mary at the cannon. He may have thanked her after the battle. Some sources say that he made her a sergeant. We do not know if this is true.

John Hays did not die. After the battle he rested and got better.

After the War
When the war was over, Mary and her husband went home to Carlisle. In 1783 Mary had a baby boy. They named him John L. Hays. Mary’s husband died when the boy was five. Later Mary got married again. She married John McCauley. He had also been a soldier. The new marriage was not a happy one. John McCauley died in 1813.

What Mary Was Like
Mary was a short woman. She often wore a white dress. Over this she wore a striped skirt. This skirt was split in the middle, and pulled to either side. She wore a white frilled cap. Mary had learned to swear in the army. Sometimes she used bad language. Sometimes she said what she thought in a blunt way.

Working Life
Mary worked as a servant for most of her life. She worked for a number of families. One of them was the Miles family. She took care of their two sons. She nursed Mrs. Miles until her death in 1822. Mary loved children. She was a kind, careful nurse.

A Pension for Mary
Many soldiers had died in the war. Their widows did not have much money. The government gave them money, called a pension. This money was to help them live. Mary asked for a pension. She deserved one, because her husbands had been soldiers. When she got her pension, it was given to her for her own work. The act said “For the relief of Molly McKolly for her services during the Revolutionary War.”

Later Life
Mary lived with her son John when she was old. John and his wife Elizabeth had seven children. Mary must have enjoyed them. She died on January 22, 1832. She was 79 years old. She is buried in Carlisle.

Where we see her name today
Mary's tombstone is in the Old Graveyard in Carlisle.

There is a monument in Monmouth, New Jersey. On its side is a picture of Mary.