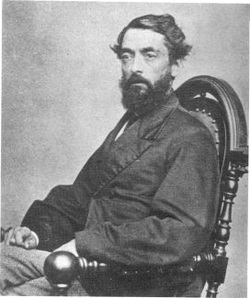 Early Life
Edwin Drake was born in Castleton Corners, Vermont, in March of 1819. His father was a farmer. Edwin helped on the farm. He went to local schools. When he was nineteen, he left home.

Work Experience and Illness
Edwin had a variety of jobs. None of them lasted for very long. He worked as a clerk, a salesman, and a railway express agent. Finally in 1849 he got a new job. He worked for the New York & New Haven Railroad. He was a train conductor.  He stayed in this job until 1857. Then he became ill. He had to leave his job. He moved to New Haven, Connecticut to get better.
Edwin was living at the Tontine Hotel in New Haven when he met an interesting man. His name was James Townsend. He had recently formed a new company called the Seneca Oil Company of New Haven. This company was interested in getting oil from a piece of property in Titusville, Pennsylvania.

Why the interest in oil?
People needed ways to light their homes. For years they had filled their oil lamps with whale oil.  So many sperm whales had been hunted and killed that there were hardly any left. Whale oil had become very expensive. People needed another fuel for their lamps.
Oil can be found in the ground in certain parts of the world. It is sometimes called petroleum, sometimes crude oil, and sometimes bitumen. People have used it since ancient times for various things. It has been used to preserve mummies, kill lice, caulk ships, and as a medicine.
Native Americans in Pennsylvania knew about oil. The Seneca tribe had used petroleum since the 1400’s. They called it “antonotons.” This means, “Oh, how much there is!” They preserved animal hides with it. They used it to make paint glisten. It was good for broken skin. They collected the oil by digging a pit and waiting for the oil to seep in. They also used blankets and boards to collect oil from the surface of Oil Creek.

This mosaic by Henry Mercer shows Native Americans burning surface oil from Oil Creek.
Early settlers traded with the Seneca for this oil. They called it Seneca Oil. They used it as a medicine. They believed that it could cure headaches, toothaches, lung disease, burns and cuts.  It was good for sprains and sore joints. They rubbed it on their horses. The smell kept the flies away. They also used it to lubricate the wheels of their carts. The oil helped make their wagon wheels turn smoothly. Many frontier families kept a bottle of Seneca Oil in the house.
Sometimes the petroleum was a nuisance. People drilled wells to get salt water. When they let the water dry, they had salt. At times petroleum would seep into the salt wells. It ruined the salt. Settlers in Pennsylvania had tried to use Seneca Oil in their lamps as a fuel, but it didn’t work very well. It burned with a black smoke. It smelled bad. Then someone gave a sample of petroleum from Titusville, Pennsylvania to a man named Benjamin Silliman, Jr. Mr. Silliman was a professor at Yale University. He analyzed the oil. He explained that the petroleum could be distilled to get out the impurities. Then it could be burned in lamps. The process for distilling was not expensive. Here was the new fuel that was so badly needed!

Working for the Seneca Oil Company
When Edwin Drake met James Townsend, they talked about Mr. Townsend’s new business. He and some others had bought the land in Titusville, Pa. where the oil had been found. He planned to get the oil out of the ground, distill it, and get rich selling lamp oil. He convinced Edwin to buy a little stock in the business. Then Mr. Townsend had a good idea. He needed someone to go to Titusville for him. This person would inspect the land there and make a report on what he saw. Edwin was the perfect person for the job. He had some free time. He knew a little about wells. But best of all, because he had worked for the railroad, he had a free train pass. He could go to Titusville at no cost. Mr. Townsend hired Edwin.
Edwin made his first trip to Titusville in December 1857. He made a report on the land. He told of pits dug in the ground. These pits were lined with boards. The oil seeped into these pits. There seemed to be plenty of oil there. Edwin also did some work on the company’s ownership papers.
Edwin’s report was encouraging for the Seneca Oil Company stockholders. They hired Edwin as a full-time employee. He became the General Agent of the Seneca Oil Company. His salary was $1000.00 per year. The company also started to address his letters to Colonel Drake. He wasn’t really a colonel, but it looked good on the envelope. They hoped the local people would be impressed.

Edwin Drake’s Family
Edwin’s first wife was named Philena. She had a son named George in 1850. Then in 1854 she died in childbirth. In 1857, Edwin married again. He married Laura Dowd. They had two sons named Alfred and Charles.

Getting Oil Out of the Ground
Edwin wasn’t sure how to get the oil out of the ground. Seepage was too slow. He thought digging a well would work. He spent several weeks with a crew digging a well. When water flooded the well, Edwin knew that he needed to learn more. He traveled to Tarentum, a town near Pittsburgh. There he watched how salt wells were drilled. He decided to use the same process.
To drill a well, Edwin would need special equipment. He bought drills and a windlass. Then he bought a six-horsepower steam engine and a “Long John” Boiler. This would give the power to make the drill go. Edwin wanted to hire someone who was experienced in drilling salt wells. He hired one man. The man promised to come to work, but he never did. Edwin went and found another man. He also broke his promise. By now it was winter. The ground was frozen. Nothing more could be done until spring.
During the winter Edwin met William A. Smith. People called him “Uncle Billy.” Uncle Billy Smith was a blacksmith from Tarentum. He had drilled many wells. Edwin hired Uncle Billy to drill wells for him. He would pay him $2.50 per day. Uncle Billy brought along his son Sam, who was sixteen years old, at no extra cost.
In the spring the men started to work. As Uncle Billy drilled, the well filled with water over and over. The men worked for almost a year. Edwin was running out of money. He knew that something had to be done. He had to get past the water. Edwin had a bright idea. He drove to Erie. He bought some pipe sections made out of cast-iron. Each one was ten feet long.  Back in Titusville, Uncle Billy and Edwin joined the sections together. Then they drove them into the ground using a battering ram made of oak. They drove the pipe 32 feet into the ground. Now the water could not seep in. They drilled inside the pipe. 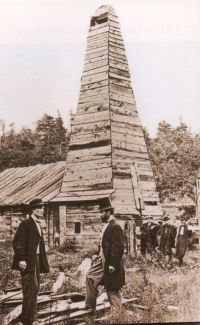 Edwin Drake [right] and Peter Wilson [left] in front of the engine house and derrick for the well which began the oil industry, 1866. Photograph by John Mather.
Hardly anyone believed in Edwin. His well was called “Drake’s Folly” by local folk. Seneca Oil Company was losing patience. They sent very little money to fund the project. Finally they stopped sending money altogether. They told Edwin to give up and go home. Edwin kept working. When he used up the company’s money, he used his own. By August his money had almost run out. There was no money to feed his family. Two local businessmen decided to help. They took Edwin to the bank. They guaranteed a loan for 500 dollars for him. This means that if he did not pay it back, they would. Now there was money for food, and money to continue the work.

A Successful Well
On Saturday August 27, 1859 Edwin and Uncle Billy were drilling. They had reached a depth of 69 feet. Suddenly the drill dropped 6 inches at one time. This had never happened before. It was late in the day. The two men decided to stop for the weekend.
On Sunday afternoon Uncle Billy went to check on the well. He took Sam with him. The two men looked into the shaft. Uncle Billy made a cup out of some spouting. He dipped it into the liquid in the pipe. It was oil! The well had been a success.  The well produced about 10 barrels of oil each day. This was more than had ever come out of a well before. The men borrowed a hand pump. They pumped the oil into a washtub and some whiskey barrels.
Edwin sank another well. This one produced about 24 barrels each day.  Edwin had done a good job. But the Seneca Oil Company did not hurry to pay him. It took until May of 1864 for them to give him the money they owed him.

Edwin Loses the Chance to be Rich
Edwin could have made some money. If he had bought some land, he could have drilled his own well. But he had no money. More than this, Edwin had invented the drive pipe. His method is still used by oil drillers today. Edwin should have gotten a patent on his invention. It would have made him rich. He did not.
Edwin and his family stayed in Titusville. Edwin worked as a Justice of the Peace. He also was an oil buyer for merchants in New York. He did not do well at either job. By 1862 the family had very little money. They left Titusville. Then Edwin lost the rest of their money in bad investments. By now he was very ill. He could only sit in a chair.
Edwin’s wife, Laura, needed a way to make some money. She rented some of the rooms in their house to people who needed a place to stay. This earned some money. She also did sewing for money. The family had a fourth child in 1865. The baby was a girl, named Mary Laura.

A Pension for Edwin
The people of Titusville heard about the Drake family’s poverty. They wanted to do something to help. In 1873, they asked the General Assembly of Pennsylvania to give the family a pension. They said that Edwin Drake deserved the pension because he had done so much to help the economy of Pennsylvania.  The General Assembly agreed to give Edwin a pension. He was granted 1500 dollars per year. After his death, his wife would receive the pension for as long as she lived. This was a great relief to the family.

Edwin Drake died in 1880. He was buried in Bethlehem, Pennsylvania.  His wife Laura lived until 1916. 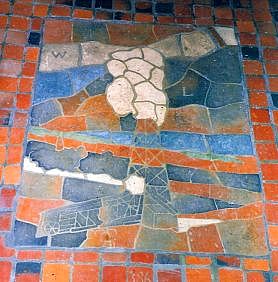 This mosaic by Henry Mercer shows a working oil well
Where we See His Name Today
In 1901 Edwin Drake’s body was removed from Bethlehem. It was buried at Woodlawn Cemetery, in Titusville. A monument was set up by his grave.

On August 22, 1914 a bronze tablet was attached to a boulder and placed on the site of the well.  On the tablet it says:

“This native boulder marks the spot
Where through the foresight, energy
and persistence of
Edwin L. Drake
the First Well was drilled for oil.
On August 27, 1859 oil was found
at a depth of sixty-nine feet.
This great discovery inaugurated the
petroleum industry.”

In 1934 the Drake Well Museum and Memorial Park were created. The Drake Well Museum is still open, and is run by the Pennsylvania Historical and Museum Commission. There is a replica there of the engine house, derrick and steam engine that Edwin Drake used.