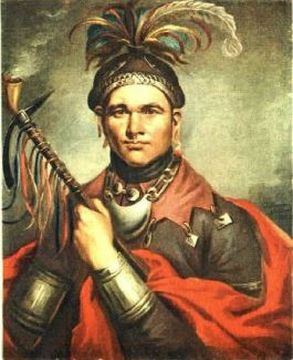 Chief of the Seneca
Level 2 biography

Fast Facts
Cornplanter was a chief of the Seneca Tribe. He was a warrior. He later worked for peace between the United States and the Native Americans.

Born: between 1740 and 1750 at Ganawagus, New York.
Father: John Abeel (or O’Beel or O’Bail) Dutch trader and gunsmith
Mother: a Seneca woman of the Wolf clan
Native American name: Kaintwakon, which means “by what one plants”, or Gyantwachias, which means “the planter”
English name: John O’Bail
Died: February 18, 1836 at Cornplanter Town

Early Life
Cornplanter was the son of a Seneca mother and a Dutch father. In Seneca culture, a child’s race is that of his mother. Cornplanter’s mother raised him as a Seneca. His father was a trader. He was also good at repairing guns. He did not stay with the family. Cornplanter noticed as a child that his skin was lighter than that of his playmates. His mother told him that his father was a white man who lived in Albany. He went to see his father as a young man, but was given nothing but a meal.

During the Revolutionary War
The Seneca were a part of the Iroquois League, which was later called the League of Six Nations. There were many Seneca people, and they were divided into two parts. Cornplanter belonged to the group called the Chenussio people. Cornplanter’s uncle (his mother’s brother) was named Kiasutha. He was the local chief for the Iroquois League. His people had dealings with both the British and the Americans.
When the American Revolution started, both sides told the Native Peoples to stay neutral.  After a while both the British and the Continental Army wanted help from the Iroquois. The British offered the Iroquois generous amounts of rum and goods if they would join them in the fight. The Iroquois met together at Oswego on July 1777, to decide what to do. The two representatives of the Chenussio were Kiasutha and Cornplanter. Kiasutha was for the Americans. He and Cornplanter voted to stay neutral. When the Iroquois voted, the majority voted to join the British. Kiasutha and Cornplanter honored this decision. Their people fought for the British side. Cornplanter was a “captain” of Indians during the Revolutionary War. His nephew fought with him. His name was Governor Blacksnake.
General Washington was angry with the Six Nations for siding against the Americans. He ordered General John Sullivan to go through Iroquois country and destroy their villages, their grain, and their animals. This was done between May and September of 1779. The Iroquois suffered terribly because of this. The next winter was a hard one. It was called “the winter of the deep snow”. It was extremely cold, and at least four feet of snow lay on the ground. Many Iroquois froze or starved to death. This did not help them to love the Americans. They continued to fight with the British.

Relations with the New United States
At the end of the Revolutionary War, Cornplanter was the major chief of the Senecas. He wanted to take care of his people. The British had promised to look out for the interests of the Native Americans. They did not. Cornplanter was a practical man. He knew that his people would have the best chance of good treatment if they were friendly with the new United States. He worked for peaceful relations between his people and the new nation.
The Native Americans called the new United States the “Thirteen Fires”. In October 1784 the Six Nations met with the Thirteen Fires at Fort Stanwix in Rome, New York. The Native Americans had large areas of hunting land. They deeded the land to Pennsylvania at this meeting. They were given five thousand dollars.
Other Native American tribes used the hunting land that had been sold. Some of them wanted to stop the white people from settling the land. Cornplanter urged them to stay peaceful. Even some of the Seneca, including Cornplanter’s relative Red Jacket, wanted to resist the white people. Cornplanter knew that his people would be destroyed if they fought the white people. Cornplanter was not always popular with his own people. Still he continued to do what he thought was right. He hoped that he would be able to get a piece of land where his people could live.

A Meeting with President Washington
In 1790 Cornplanter and his brother Half-Town, who was also a chief, went to Philadelphia. They wanted to complain about the treatment of the Native Americans. President Washington and Governor Mifflin listened to the two chiefs. They promised to protect the land of the Iroquois. The President offered to help them learn to plow and keep cattle the way the white people did.
Red Jacket became the official leader of the Seneca in 1791. That same year President Washington sent Chief Cornplanter to urge the Native Americans in Ohio and Michigan to act in peace. He was not able to convince them. Cornplanter tried to keep friendly relations with the United States. When he heard of raids being planned, he warned Fort Franklin.  He visited George Washington several times on business for his tribe. In 1794 a group of Native Americans rebelled. Cornplanter went on a peace mission to them. They would not listen to him. They attacked the Americans. General Anthony Wayne and his men defeated them at the Battle of Fallen Timbers. Cornplanter was not able to keep the others from fighting, but he did keep his own people from taking part in the rebellion. Because of this his people remained safe.

Land for the Seneca
In 1792 Pennsylvania granted Cornplanter 500 acres of land. He kept the land until 1818, and then sold it.  On March 16, 1796 Pennsylvania gave him a large piece of land in Warren County on the Allegheny River. The land was given to him to thank him for his services to the state. He settled his people on this land, which became known as the Cornplanter Tract. In 1798 there were 400 Seneca living on the land. This was not a reservation. It was land that belonged to Cornplanter and his people.
Cornplanter retired to his land, and left the running of the tribe to others. He was unhappy about the effects of rum and other strong drink on his people. He repeatedly begged the white people not to sell liquor to his people.

Relations with the Quakers
Cornplanter admired the beliefs of the Quakers. When he was staying in Philadelphia in 1790, he attended Quaker meeting. In 1791 he asked the Quakers to educate his son Henry and two other boys. He wanted them to learn to read and write, and to love peace.
In 1798 the Quakers came to Cornplanter’s land and set up schools. They taught the people to read and write, to be honest, and the best ways to farm. Because of their guidance, the Cornplanter Tract had good roads and houses. The fields were plowed, and there were plenty of cattle.

An Offer of Help
In 1812 the United States again was at war with Britain. Cornplanter came out of retirement and offered to bring two hundred warriors to fight with Colonel Dale’s regiment. Their offer was refused. Some Senecas did join the army separately.

Later Life
In 1821 Warren County tried to make Cornplanter pay taxes for his land. He protested. He said that the land had been given to him by the United States. After much talk, the state agreed that he should not pay taxes.
Cornplanter had a half brother named Handsome Lake. He warned that the Native Americans must turn from the ways of the white man to the ways of their own people.
Cornplanter felt ashamed that he had led his people toward the culture of the white man. He closed the Quaker schools. He burned his uniform from the army and broke his sword. Even though they had been sent away, the Quakers settled nearby in Tunesassa. Cornplanter remained friendly with them until his death.
Cornplanter died on February 18, 1836. He asked that his grave be left without a marker. The State of Pennsylvania put up a marker in 1866. This was the first marker ever placed by a state in memory of a Native American chief.

What Happened to Cornplanter’s Land?
Cornplanter’s people lived on his land after his death. They had a school and a church. As the years passed, many people moved away. Some moved to the Allegany Reservation in New York.  After a while people only lived on the land in the summers. In late 1964 the last person living there left.  Pennsylvania built the Kinzua Dam and flooded the area. Today it is a reservoir.

Where we see his name today
Cornplanter State Forest is located in western Forest County. The area called the Cornplanter Forest district consists of 1,256 acres of land.